As one of the most vital organs in your body, your brain is a powerhouse that deserves love and attention. The brain needs fuel to maintain peak performance and support its functions.  This is why brain foods are so crucial to our health. We’ve compiled a list of foods that can help exercise and supplement your brain to improve anything and everything from memory and awareness to mood and regeneration.

1. Turmeric
Turmeric is a beautifully useful root, especially when it comes to the brain. It has a compound called aromatic-turmerone, which is believed to boost regeneration of brain stem cells and increase neural self-repair.

Aromatic-turmerone has also been researched to help fight neurodegenerative diseases and break up existing plaques, such as those linked to Alzheimer’s, which have taken home in the brain.

2. Salmon
We’re all familiar with the health benefits of omega-3’s found in salmon, such as decreasing heart disease, cancer, and arthritis. But, did you know omega-3’s also improve brain function?

A brain needs omega-3’s to build cells, bettering learning, comprehension, and memory. These fatty acids are highly concentrated in the brain, taking up nearly 50%, and exist to aid the process of cognition, performance, and basic functionality.

3. Eggs
The ever-common breakfast food is actually a great way to fuel the brain for a productive day. In addition to having vitamins such as B6 and B12, eggs also have a micronutrient called Choline, that can help regulate and enhance mood and memory.

Studies also show that the B vitamins in eggs potentially slow mental decline and can improve the brain’s ability to synthesize information, and regulate chemicals.

4. Dandelion Greens
Dandelion greens are a superfood that doesn’t get a lot of credit for the mass amount of benefits they hold. Just like superfood leafy greens, such as kale and spinach, dandelion greens contain lutein, a neuroprotective. Lutein is believed to support brain structure and neural membrane structure, reinforcing the strength and function of these membranes. With a supporting structure, the brain continues to foster an environment for new cells, which is believed to slow the aging process of the brain.

5. Jicama
This root vegetable has a variety of benefits, such as a digestive aid, immune system booster, and energy booster. Most importantly, vitamin B6, which is found in jicama, is linked to increased brain and cognitive function.

Vitamin B6 helps in metabolic processes by breaking down proteins into amino acids that the body productively uses rather than waste. Amino acids are known to help neurotransmitters communicate to the rest of the body, heighten awareness, and lower stress.

6. Blueberries
Let’s talk about blueberries for a second. This is one powerful berry for a few reasons:

Blueberries are one of the most antioxidant-rich foods. Ever. These antioxidants help counteract free radicals and inflammation, both of which may be factors in aging and diseases, such as Alzheimer’s, Parkinson’s, and Dementia.

Blueberries are also full of nutrients and vitamins, including Vitamin C, which improves the immune system and the production of collagen, Fiber, which helps to regulate cholesterol, and Phytonutrients that offer antioxidant properties and anti-inflammatory benefits.

These components have also been believed to improve brain cognition, memory, and mood. 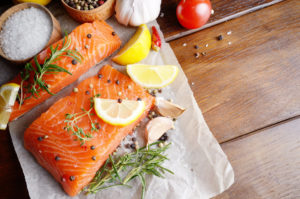 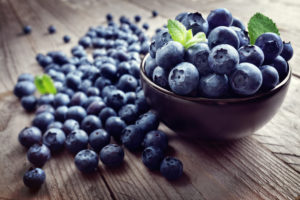 Get healthy recipes, special offers, and the latest news from Sam Binkley